The Importance of Networks and Relationships

It’s not what you know, but who you know (Or so they say)

We are very happy to announce that the 2016 IFCO European Conference is going to be hosted in Sheffield, UK. But how did this happen, and how did we pull this together in a few months?

Let’s rewind to November 2015, a mere four months ago, to the IFCO 2015 World Conference in Sydney Australia. I sat, as a newly elected member of the IFCO Board of Directors as we discussed the possibility of not being able to host a conference 2016, due to the partner country pulling out last minute. Before I quite knew what I was doing, I found myself, hand up in the air, volunteering to carry out initial research and scope of hosting the conference in the UK.

My thoughts were rushing through the many networks I knew and worked with, the universities I had created strong relationships with over my four years of working in this area. Within a night of not sleeping (thanks to jet lag) I had a plan and direction to move forwards. I knew I needed to do some talking!

Shortly after returning from Australia, (and a solid 20 hours sleep to reset my body clock) I attended the official launch of the NNECL's (National Network for the Education of Care Leavers) new website. This is a network that I had been a part of since the networks' first days and my first days of working in the area. Over four years ago sat in a room in London, with a bunch of people who knew there had to be something we could create, to fill the void of connectivity and national best practice sharing when it can to Care Leavers and Higher Education. A network of people I trust, and they trust me.

So, I am at the launch in London, running around slightly, as I was meeting and greeting the Keynote speaker Lord Listowel, as I knew him through my work with the Trauma Recovery Charity (IRCT) due to him being patron of said charity. After the keynote is finished, I finally settle into the event, and get to do what I love: Networking!

Across the room I see an old colleague from when I worked at Sheffield Hallam University. We start catching up on work and my time in Australia at IFCO2015. Which, leads me onto speaking about me volunteering to see if I could organise the event in the UK. “Do it at Hallam!!”, was the fast response I received. Well, of course, this made perfect sense in theory, I knew the staff, I knew how the university worked, the facilities. So we planned on sending emails about setting up an initial meeting to discuss the possibility of this in the next few days.

Within a week we had organised a meeting with the key people in the university to talk about the plans, costs and of course, ability to host a European Conference on Looked After Children and Care Leavers. I was very happy when I found at the meeting, that I already knew “Nick, Events Manager”, when I worked at Hallam on the Open Days Project and had had close working relationships with the other members of the meeting. Due to existing relationships with the university, meetings and planning went easy and well, with initial plans in place before Christmas. The foundations were laid for the possibility of an amazing conference…

The new year brought forwards the need to put structure behind the plans, and I knew I needed guidance with this. I am very lucky to have an amazing working relationship with fellow Board member Jean Anne Kennedy, who in 2014, with the also amazing IFCO Board member Danielle Douglas pulled together IFCO 2014 European Conference in Ireland. I knew I could trust her skills, confidence and ability to help guide me through the processes required to pull off organising a European Conference.

So a hop skip and jump over the Irish Sea, Jean Anne joined me in England to sort the finer details of the conference. Three days later, after a lot of working and forcing ourselves to stop working at 10pm each night, we had cracked the backbone of the planning process. A few days later our plans are passed by the board, and it become reality! As a first time conference organiser this moment made me very proud!

Just through the planning process, the success of the conference is down to contributions of those in old and new networks and relationships. Attending and contributing to this conference itself will also provide you with massive opportunities to network and create new relationships and of course help to improve the lives of those in care system and those who have left care. Which leads us neatly to where we are now… Launching the location, and for you amazing people to help become the body of the conference.

Abstracts are open for you to apply to speak to share your skills and knowledge, opportunities open to sponsor this amazing event and of course… tickets are on sale (early bird rates) to attend.

In a bit ducks

PS If you would like to brush up on the Yorkshire dialect follow the link below: http://www.bbc.co.uk/northyorkshire/voices2005/glossary/glossary.shtml

Carrie Wilson is a member of the IFCO Board of Directors and is an organiser of the IFCO 2016 European Conference. She grew up in the care system in England from the age of 11, with Social service support ending at the age of 23, when she finished her degree. As a student Carrie was a mentor for those still in care. Once graduated, she worked for a year at Sheffield Hallam University leading the Care Leaver project, aimed at involving more Care experienced young people into Higher Education. Once the work was embedded, Carrie moved on to her current role as Young Peoples Project Coordinator at the Care Leavers Association, the leading user led national charity in England. She works directly with those at the leaving care age, up to the age of 30, to improve the current system and to support those going through the transition process. This includes advocacy, mentoring programs, helping to create national networks of best practice and consulting on issues affecting those leaving care. 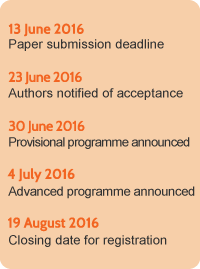